untied comments on today’s announcement that National Insurance rates are to be increased by 1.25% to cover social care costs

Jonathan Yeomans, head of tax at untied, the personal tax app, comments on today’s announcement that National Insurance rates are to be increased by 1.25% to cover social care costs

It’s been an incredibly difficult 18 months for many salaried and self-employed individuals and to hike National Insurance by such a significant percentage is going to be devastating for many of them.

To be hit by a 1.25% hike in national insurance rates just as the economy looks like it is starting to improve is another significant body blow to the very people and businesses that have suffered from the impact of the pandemic.

A tax by any other name

National Insurance is a regressive tax that disproportionately targets younger and lower income taxpayers (see untied's graph below which highlights NI payments as a percentage of income after a 1.25% increase). Pensioners, who would benefit most from these reforms, do not pay National Insurance on any occupational or state pension income, and many younger taxpayers now being hit by this charge would consider this unfair. It may be argued that there are other ways to raise this money rather than taxing workers at the point that the workplace is returning to normal.

Essentially National Insurance is a tax by another name. It’s a softer option because the government knows that people will more easily accept an increase in NI than they would an income tax increase. However, whichever way you look at it, the social care reforms break the government’s 2019 election manifesto pledge not to raise the rates of income tax, National Insurance or VAT.

What does this mean (in figures)?

A person earning £30,000 will see their National Insurance Contributions increase by around £255 a year (see below for the impact on other income levels). 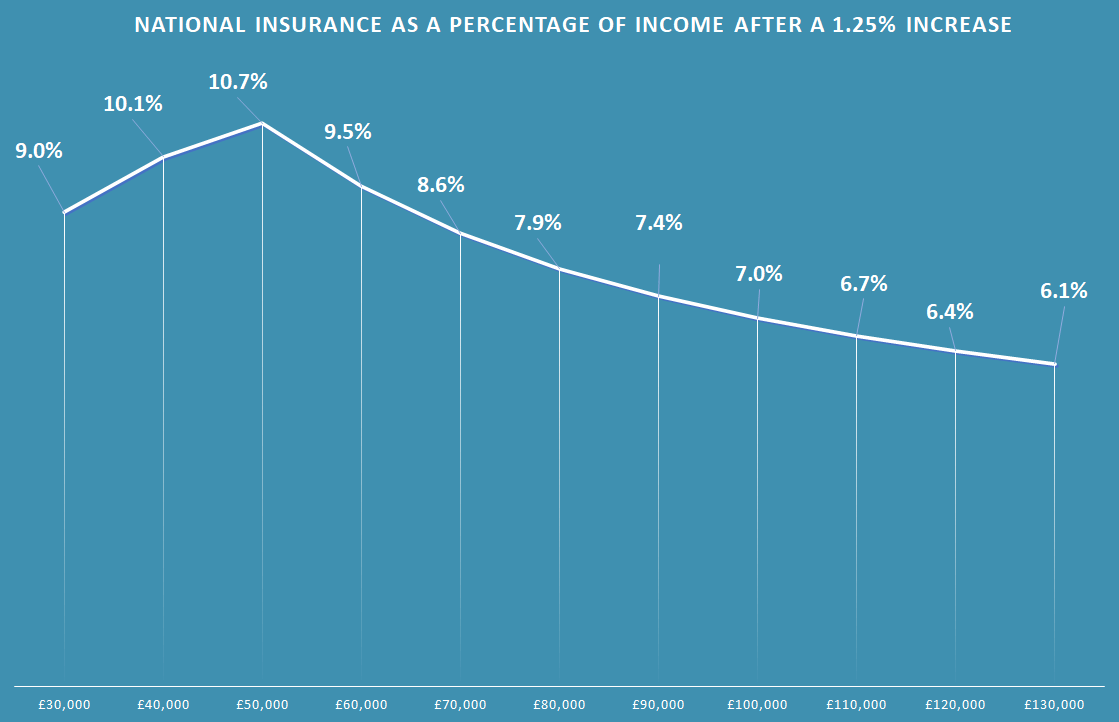